The Nutcracker at Christmas: what is its origin?

We couldn’t leave you without talking about the famous nutcracker.

Christmas trees, lights and other objects fill the shelves of shops every year, but there is one object in particular that characterises the holidays and has a unique history. We are talking about the nutcracker, a classic Christmas toy, whose origin is based on the story by German writer Theodor Amadeus Hoffman entitled “The Nutcracker and the Mouse King” in 1816. 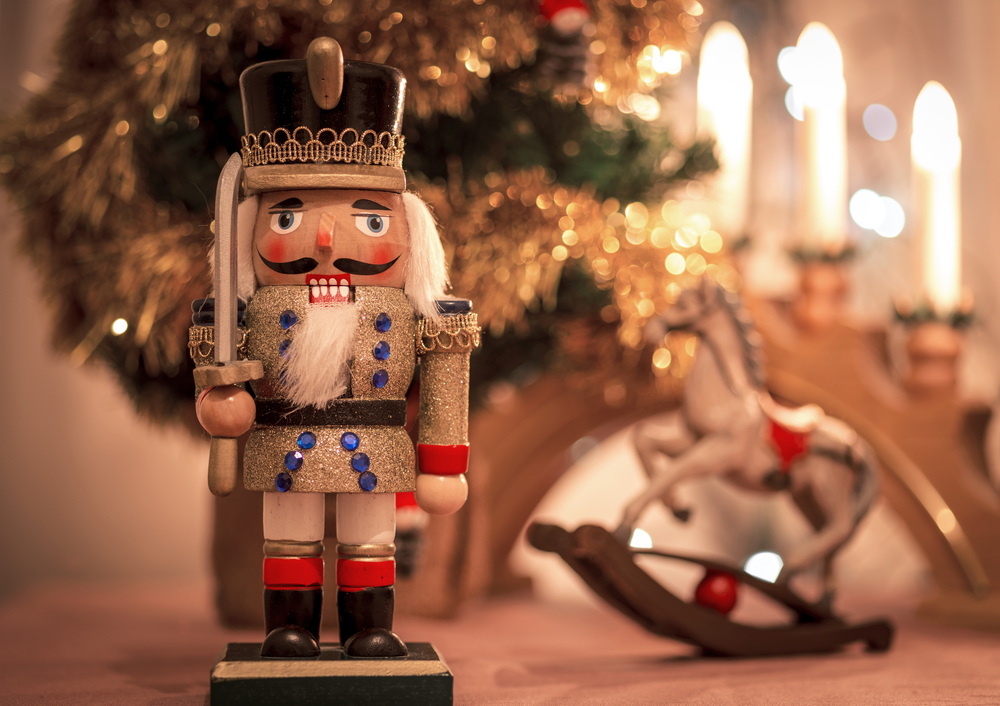 The Nutcracker and the Mouse King

The tale tells of a little girl named Clara (or Marie in George Balanchine’s adaptation) who got a nutcracker at Christmas time. Clara/Marie’s uncle Drosselmeyer gave her a wooden doll. However, Drosselmeyer told her that the doll was a prince who was bewitched and turned into a wooden toy. The prince had the ability to crack nuts with his teeth, because a mouse had bewitched him.

Clara/Marie later discovered that the story was true, because she found out that her prince was waging a war against the mice, and the little girl Clara sided with the Nutcracker and fought him in battle. In the second part, the prince and Clara/Marie meet the sugarplum fairy who presents them with a beautiful ballet performance with the sweets.

Grimm’s Nutcracker symbolises good luck: the teeth protect houses from evil spirits, so it is traditional, especially in Germany where they originate, to give these figures to children at Christmas time.

Jacob Grimm wrote about the significance of nutcrackers in his book “German Mythology” in 1835. The author explains that these wooden nutcrackers were carved to give protection and strength to their owners.

Hoffmann was inspired to create this character by the fact that in Germany the Nutcracker is a representative figure of Christmas. He is considered to be a good luck charm and a bringer of prosperity to the home. Choosing a nutcracker is essential in this country.

The figures sculpted by Friedrich Füchtner (the renowned “Father of the Nutcracker”) caused a sensation and are still produced with great success by the eighth generation of the Füchtner family.

Today, Germany is the world’s largest producer of nutcrackers and the Steinbach company in the town of Hohenhameln is one of the most famous with more than 600 models in its 180-year history. If you want to find a nutcracker made in France, you will have to do your own research.

The Nutcracker: the new star of the Christmas ballet

The further popularisation of nutcracker dolls came in the adaptation of ETA Hoffmann’s 1816 story to a dance performance accompanied by music and an orchestra. The concert was originally choreographed by Marius Petipa and Lev Ivanov with a score by Pyotr Ilyich Tchaikovsky.

In the theatre scene of The Nutcracker, Clara (Marie in George Balanchine’s version) and the Nutcracker Soldier, arrive in Candy Land. They meet its monarch, the Sugar Plum Fairy, who receives them as distinguished guests. She greets them with an assortment of candy dances that are narrated by a classical ballet by Tchaikovsky, music and an orchestra. Finally, it is the ultimate in entertainment: the solo dance of the Sugar Plum Fairy.

Finally, the origin of the nutcracker comes from the meeting of three traditions: the children’s story “The Nutcracker King and the Mouse King” by Heinrichh Hoffman, the “Magic World” of the Grimm brothers and the craftsman Friedirch Fütchner.